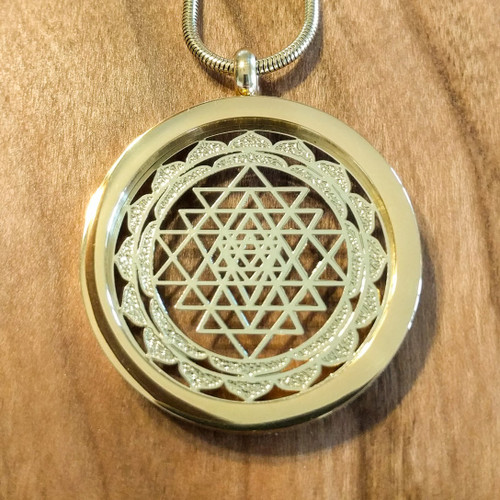 The pendant measures 1.4 inches in diameter and comes with a gold plated stainless steel chain.

A yantra is a visual Mantra, something to focus upon during meditation to assist in deepening and strengthening medtitative states. The Sri yantra, also known as Sri Chakra, is called the mother of all yantras because all other yantras derive from it. In its three dimensional form, Sri Yantra is said to represent Mount Meru, the cosmic mountain at the center of the universe.

The Sri Yantra is conceived as a place of spiritual pilgrimage. It is a representation of the cosmos at the macrocosmic level and of the human body at the microcosmic level (each of the circuits correspond to a chakra of the body).

The four lines of the outer frame denote the figure to be a sanctuary with four openings to the regions of the universe.